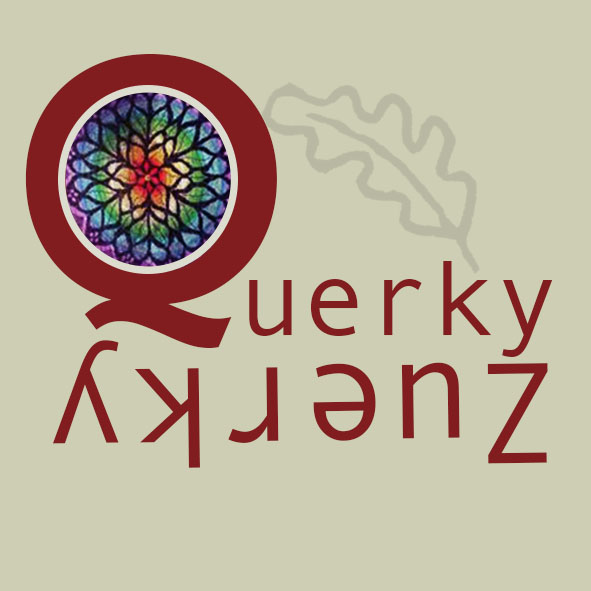 Goldwork was traditionally used in ecclesiastical embroidery and I have made burse and veil sets for 4 of my local churches in the West Buckingham Benefice in the various liturgical colours. For a further explanation of these items and the different liturgical colours please click here for an article I wrote for the benefice magazine. I am particularly delighted that these embroideries are in regular use.

The burses and veils for the Assumption of the Blessed Virgin Mary Church was the first set I worked. The red designs feature a simple cross made up of three lines to represent the trinity – the two outter lines are twin threads – one straight and one wavy couched together representing God and man. Each arm of the cross terminates in a pentecostal flame and there are 4 highly stylised dove shapes for the Holy Spirit. For the Purple set I created a design based on nails, the crown of thorns and a mesh or net which seemed suitable for the penitential seasons. The white set is double-sided with a star design for Christmas (and a small camel in the corner) and on the other side a design made up of different sized circles worked in different techniques for Easter– the central empty circle represents the empty tomb, with butterflies as a symbol of resurrection (I included a small caterpillar in one corner for fun). The green embroideries are based on a tree of life in the shape of a cross, there is a vine with grapes twining in the branches and a few stalks of wheat at the foot of the tree to represent Holy Communion. There are various insects embroidered on other areas of the veil, as well as a star map of the night sky in April (roughly Easter time) and passion flowers to reflect a carving in the church.

The embroideries for St Edward the Confessor feature a flaming cross design on red silk for which seemed nicely pentecostal. This uses a variety of goldwork techniques in the different sections. The purple set for Advent and Lent feature a double helix (with obvious reference to DNA). I’ve added patches of red metallic leather on the arms, at the foot and to one side of the cross to symbolise the wounds of Christ. The spiral at the top sprouts thorns for a crown with a small hopeful flower at the terminal. The design on the green set for ordinary time is a simple design of gold and silver tessellating fish – the fish being an ancient christian symbol. The white embroideries are inspired by Psalm 23. I have used metallic silk tissue for the still waters and the gold disk embroidered around the cross is a sunrise. I included my own poem based on Psalm 23 which I stitched into the lining of the burse. 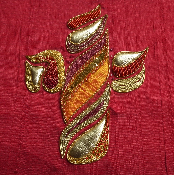 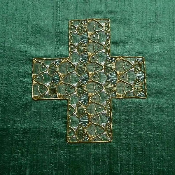 This set is for St Mary Magdalen was inspired by the prologue to St John’s Gospel. I have tinkered slightly with the wording of the text, particularly on the red ones. I have embroidered the words around the cross motif on the burse, and each is indicative of the season. The green embroideries use “In the beginning was the Word and the Word was with God and the Word was God and the Word was made flesh”. The cross is designed as fountain pens which seemed appropriate for embroidery about words. The purple set has “He was in the world and the world knew him not. He came unto his own and his own received him not”. I used an antique twist for this design which looks pleasingly sombre. For the red embroideries I have picked out the words “In him was life. The life was the light. That was the true light which lighteth everyone”. This design was inspired by the baptistery window in Coventry cathedral. The white set proclaims “And the word was made flesh and dwelt among us. And we beheld his glory, full of grace and truth”. I’ve tried to achieve a starburst effect suitable for the church’s seasons of celebration. 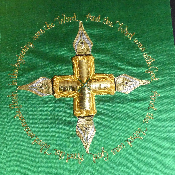 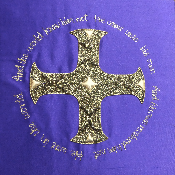 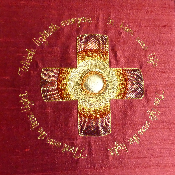 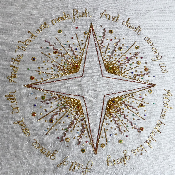 The burses and veils for St Augustine’s Church was inspired by psalms. I had already taken inspiration from 23rd Psalm in the embroideries for St Edward the Confessor’s Church, so I chose different ones. I also used a leaf design on 2 front corners of each veil based on painted decoration in the church. I also sewed some poetry into the lining of the burses.

I chose Psalm 42 (“As the deer longs for water, so longs my soul for thee O God”) as suitably penitential for Advent/Lent – the purple liturgical colour.

Verses from Psalm 19 (“the ordinances of the Lord are true and righteous altogether. More to be desired are they than gold, even much fine gold; sweeter also than honey, and drippings of the honeycomb”) allowed me to incorporate bees into the design as well as honey drizzlers for the arms of the cross for Ordinary time – the green colour.

Psalm 104 is crammed full of the natural world. I used the text “When you send forth your spirit, they are created and you renew the face of the ground” in the design, but added in a lot of the creatures mentioned in the psalm including stork, lion, leviathan (which I interpreted as a whale) and goat (alright mine’s a sheep really). This is for red occasions such as Pentecost.

Psalm 150, the last one in the Book of Psalms, is for the white set this is a psalm about praise and music. I didn’t include text as such, but I did write some musical notation in the design instead – the music is from “Come Holy Ghost Our Souls Inspire”, a very ancient hymn. The organ pipe is based on the painted pipes in the church and the arms of the cross are shaped like violins.